"At 00h00, Monday, March 24, Ryan Sandes and Ryno Griesel set off into the darkness from Witsieshoek car park. Their goal: to conquer the Drakensberg Grand Traverse, a 220km route across the highest mountain range in Southern Africa faster than anyone had before. The previous record stood at 60h 29m 30s.

The short clip above is the teaser to a documentary that was made, which you can watch on the Red Bull TV App. Below are snippets of stories from the year long project, from the initial scouting missions to the actual gruelling record attempt.

This was their journey... 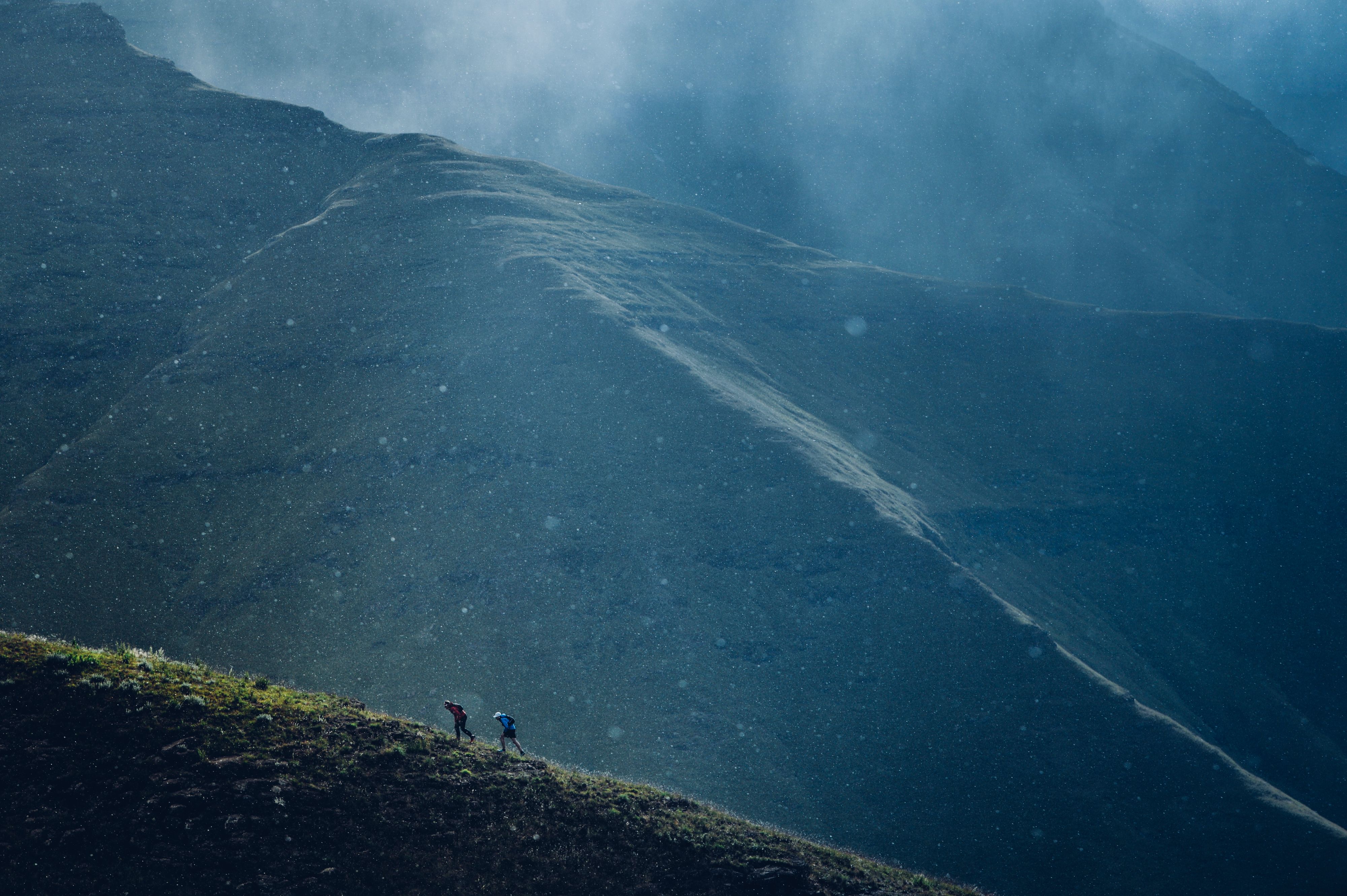 This is an excerpt from a story written by project producer, Greg Fell for Sidetracked Magazine....

Ryan Sandes: “I came out of that first foray pretty scared, having realised how far removed we would be from rescue – completely at the mercy of the elements.”

In 2013, I formed part of the Producing team for The African Attachment tasked with documenting Ryan Sandes and Ryno Griesel’s 220km+ Drakensberg Grand Traverse for Red Bull Media House. We had brought Kelvin Trautman on to shoot stills and video for the duo’s first recce. It was the first time I had ever worked with Kelvin and the assignment would see him having to shoot both mediums by himself, lugging camera gear and slimmed down safety supplies across some of the highest peaks south of Kilimanjaro, all the while having to keep up with two of the fittest guys in South Africa. Their goal was to complete the entire route. At the time, the brief we gave him seemed fair.

A couple of months ago when Kelvin and I first started talking about this article he relayed how much more was at stake that night and that maybe “pretty scared” was a bit of an under-statement.

“At about 20h00 on the second day, under a sky full of stars we set out to climb the last 300m to the summit of Giants Castle, a precipitous peak that sits around 3400m. The going was slow and I was tired. Humping camera equipment for what was now 30 straight hours across 160km of rough mountain terrain had taken it’s toll.

With less than a hundred vertical metres to go the summit, one of the Drakensberg’s infamous unannounced thunderstorms hit us. It shuddered violently around us but as each flash of lightning illuminated the summit just ahead, we decided we to push on.

An hour passed and with it came the hail and even stronger storm winds that almost laid us flat. My world had been reduced to a head-torch beam and my thoughts kept wandering someplace warm. Occasionally a little voice (probably Greg, my producer) in my head would say ‘push record Kelvin, you need this footage’, but the camera was sodden, and refusing to power up.

I had to try hard to remind to myself why I was here.

The last rock scramble almost proved the end. We were hell-bent on tagging this peak but within metres of us - a white flash, an almighty crack, a strike so close I felt it in my spine. We lay sprawled on the ground and there was a literal buzzing of electricity in the air around us. Everyone was ok. We summited and got off that mountain.

The descent took longer than we thought though and after two hours the weather hadn’t let up. It was after midnight now and temps were well below zero. We decided to take shelter. I felt lethargic, and wasn’t sure if it was fatigue or hypothermia. Ryan was shaking uncontrollably. We set about pitching our two-man tent and that’s when I discovered Ryan had decided not to pack the tent pegs. Above the howling wind, he said “they weighed too much and left them behind”. I can’t remember if I cursed or laughed. Either way we had to find some tent peg alternatives to try anchor the fly sheet and stop the rain from flooding the tent. While Ryan clung to our madly flapping shelter I went in search of rocks. And I’ll be damned if I could find any rocks lying around. I ended digging a couple up with my bare hands and using them as anchors.

As I lay in the tent, huddled next to Ryan without a sleeping bag or dry clothes, I reflected, for the second time that night, on how I had got here” 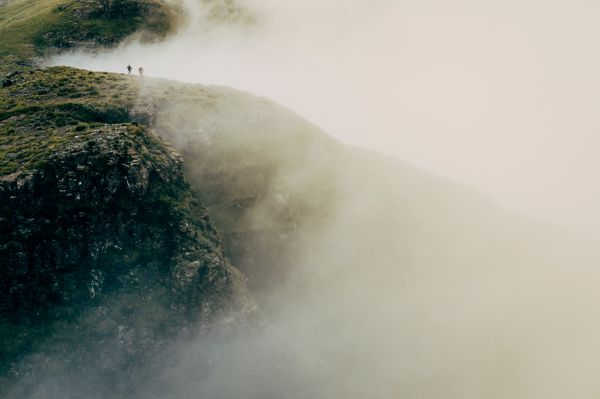 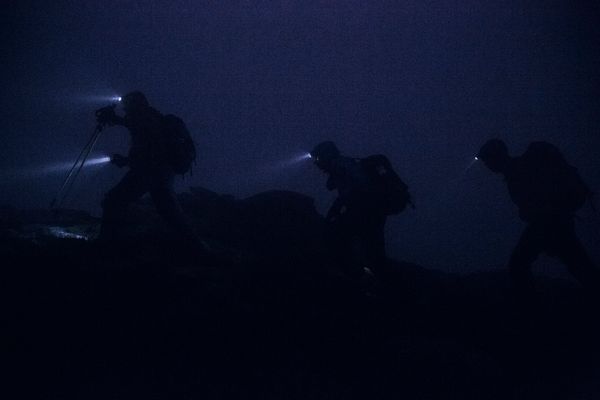 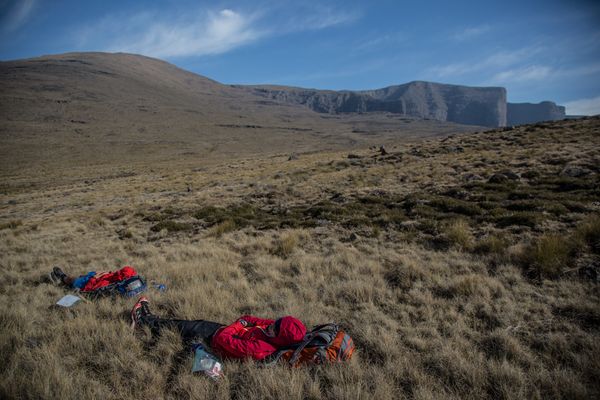 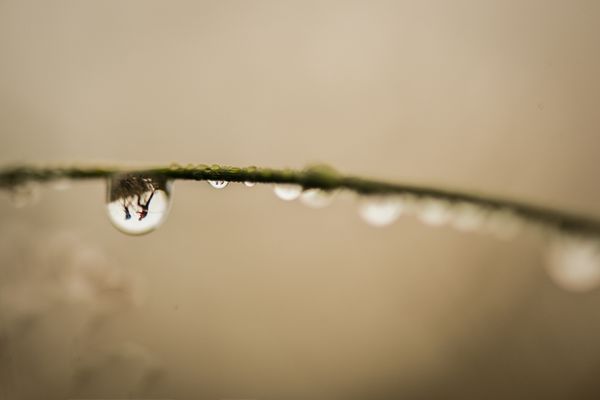 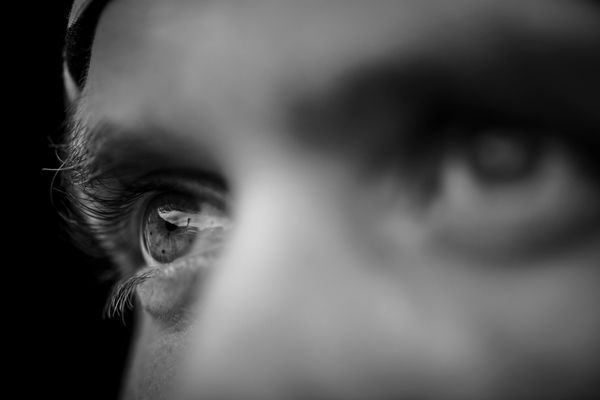 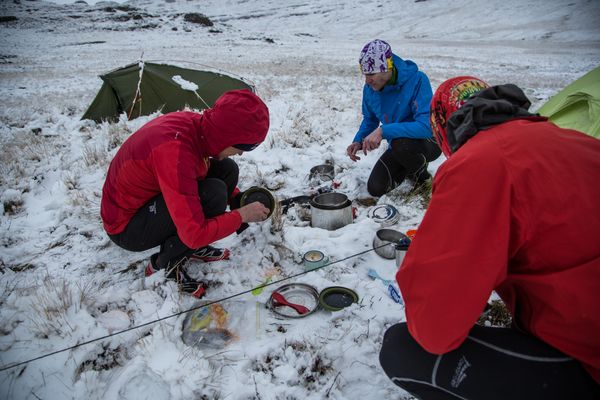 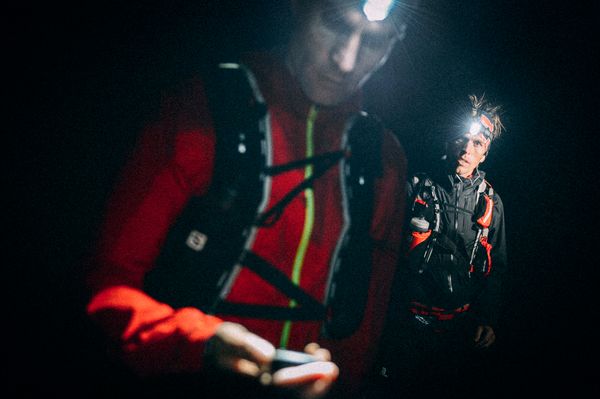 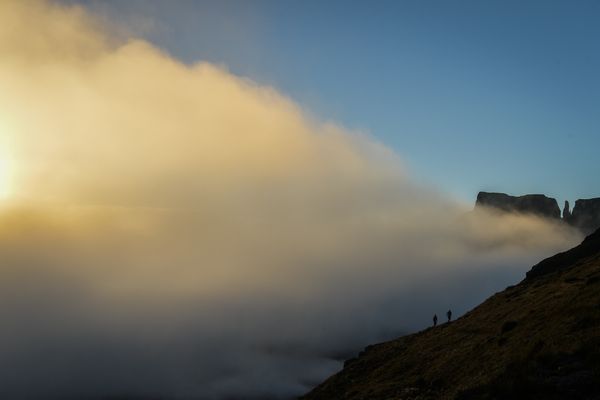 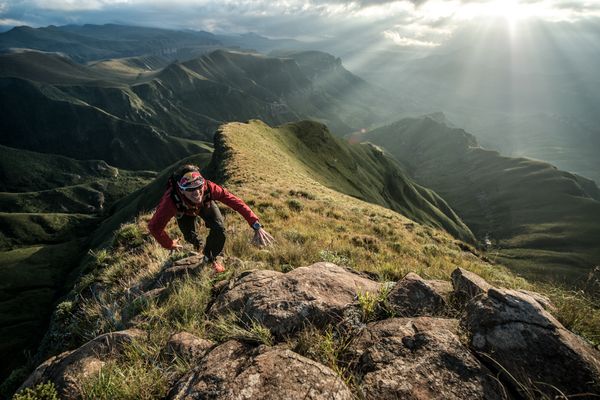 What difficulties did you have covering this story?

Since the Drakensberg mountain range is incredibly inaccessible to any form of transport and thus help, camera crew and runners had to be mountain savvy and vigilant about safety at all times. For this reason and many others we set aside a weather window of 10 days so as to severely reduce the chances of running into any major frontal or thunderstorm weather nuances during the record attempt.

The remoteness of the area also meant that getting images out to the world posed a problem. Two timeous helicopter ferries back to a mobile base camp were planned during the attempt so that I could quickly download, label and upload images for the consumption by a truly impressive online audience – Red Bull did an amazing job at putting together an interactive site where the layman at home could follow Ryan and Ryno’s every move on the mountain.

Finding the athletes was a major hassle. The top of the Drakensberg is much like a seascape in that it all looks very similar. More, without any major trails to follow the Ryan and Ryno could course their way along the escarpment wherever it suited. To circumvent this problem and avoid us flying around aimlessly burning budget in the process, we set-up a satellite phone communication plan whereby the mobile base camp could send us GPS co-ords of the runner’s position every 20 minutes. 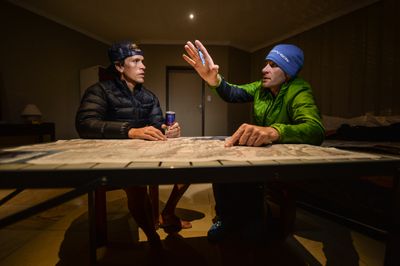 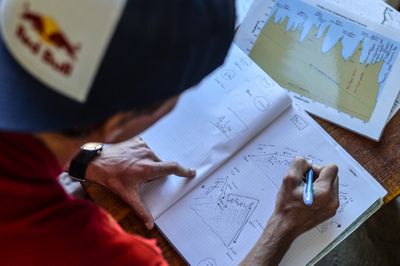 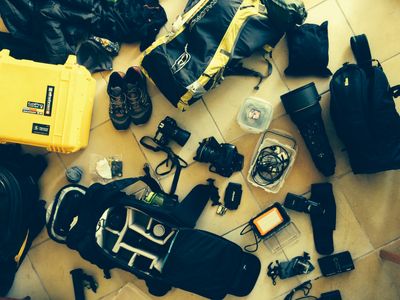 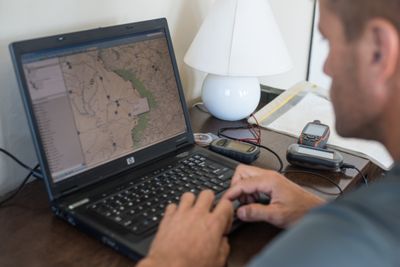 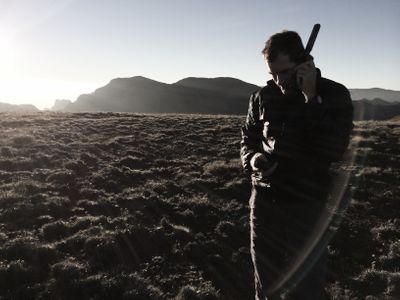 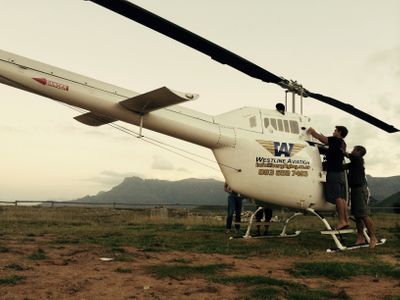 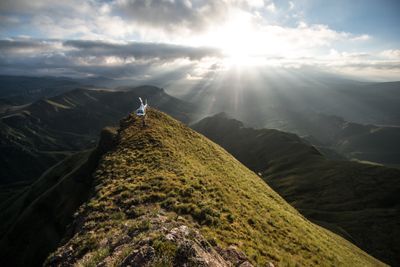 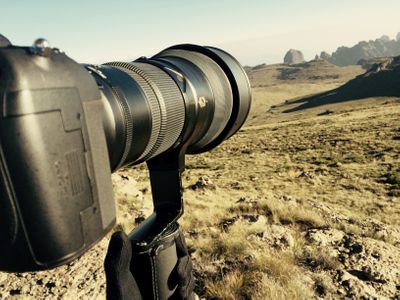 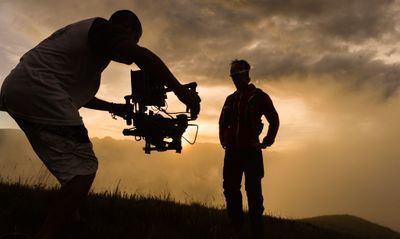 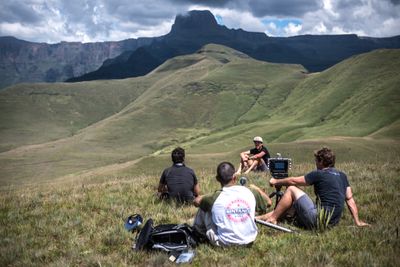 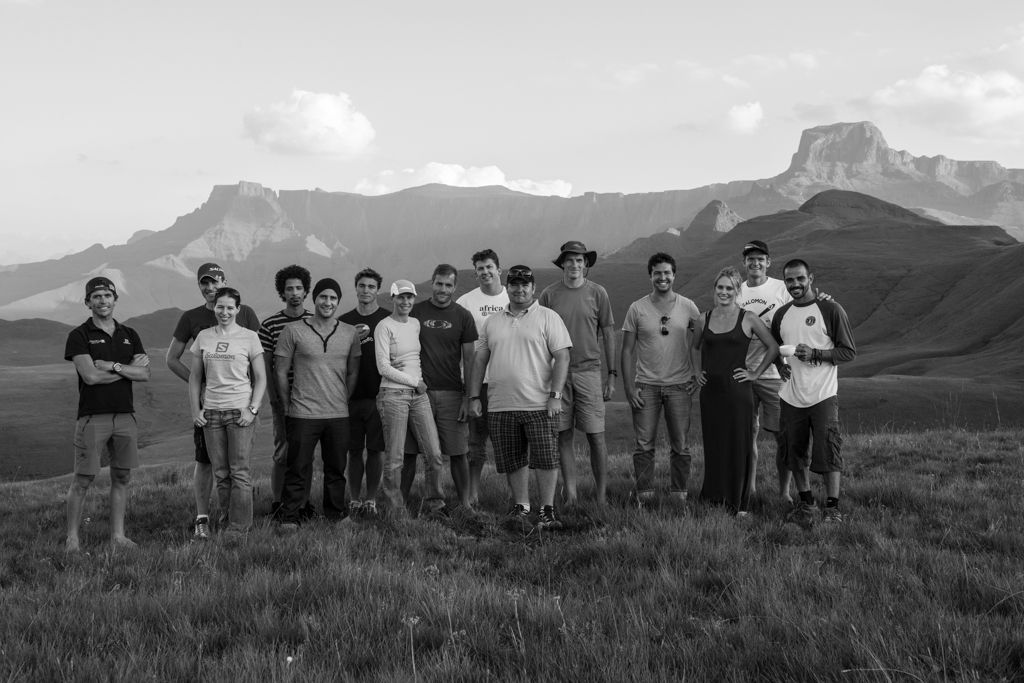 In the end Ryan and Ryno completed the 220km route in 41 hours and 49 minutes, 18 hours quicker than anyone else has done it.